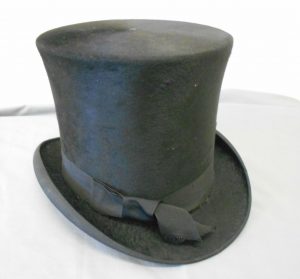 Top hat belonging to John Henry SARGOOD donated by his granddaughter in 2009.

Information provided at time of donation. No date available.
John Henry Sargood was born in Islington, Berkshire, England on 11. October 1849.
He came to Euroa as a 7-year-old in 1856 and settled at Gooram.
He returned to England at some stage and married Jane McLean in London in November 1885.
Sargood was overseer and Manager on stations before taking up the position as Manager at Yarraberb, Raywood. The Wilson Bros from Scotland owned the property. Owners of land who lived overseas, by law had to spend 3 months every 2 to 3 years on their property.
John Sargood was a J P and took an active interest in the area.
He was President of the Marong Shire in 1902 and 1909.
Sargood had a family of three sons and two daughters – Fred, Harold, Hugh, Grace and Eva. Hugh and Eva were born in Bendigo.

John Henry Sargood died on 5 December 1913 aged 64 years. He is buried at Raywood Cemetery with his wife and two sons. (Marker L23). 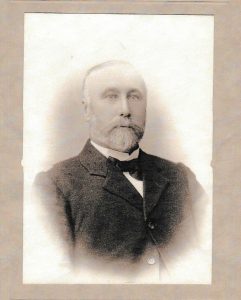