On 25 April 1808, Isabella Tyson was tried at York, West Riding Quarter Sessions and convicted of the theft of linen and sentenced to seven years transportation to Australia. Isabella’s family, husband William (Snr) and their infant son William (Jnr) aged 19 months, came as free emigrants on the same transport.

William Tyson (Jnr) had three younger brothers who were born in Australia, James, John and Peter. James and his brother William Tyson (Jnr) squatted on land in NSW at the junction of the Murrumbidgee and Lachlan Rivers, before it had been released for settlement. They were eventually able to acquire the lease for ‘Toorong’ and later the lease for ‘Geramy’. By this time younger brothers John and Peter had joined them.

Gold was discovered at Bendigo late in 1851. Early in 1852, the Tyson brothers on the Lachlan River heard the news and it changed their fortunes. As quickly as they could, James and William mustered their marketable fat cattle and took to the road. By the most direct route, Bendigo was about 200 miles from their station ‘Geramy’. 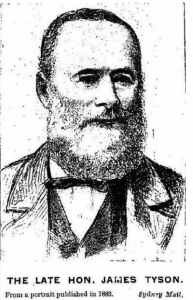 ‘Geramy’ was the point at which the Tyson holdings came closest to the new market. But this route meant crossing a plain devoid of natural water. The alternate route was longer, to Balranald then to Swan Hill and on to Bendigo, a total of two hundred and thirty miles but well-watered.

The Tyson brothers set up their ‘shop’ in the shade of willows in a bend of the creek on the northern side of the Bendigo field. The cattle were hardly cool from the drive when William slaughtered the first of them and James became a temporary auctioneer and sold the carcasses to the miners.

As soon as the auction was completed, James left both the butchering and the selling to William and headed back to the Riverina for more cattle.

In 1855 while the goldfields were still prospering, James Tyson decided it was prudent to sell the Bendigo operation before any decline in population and market took place. He was anxious to get top money. The business was sold to rival squatters James and Henry Ricketson for a reputed £55,000. Exactly what he sold is not clear as William Tyson (Jnr) remained in Bendigo with a substantial operation until 1860.

After the sale of the Tyson Brothers’ business in 1855, William and Margaret Tyson remained living in Bendigo, with William in charge of slaughter yards at Back Creek.

Advertisements appeared in the Bendigo Advertiser from 1855 for men to help work with the stock or to work at the Lachlan River, with applications to be made to Tyson’s slaughter yard, Back Creek.

The Bendigo District General Directory for 1859 lists William as follows:

The Directory listing appears to place the Back Creek slaughter yards in the vicinity of the present Hume & Iser store and timber yards. They were not the original yards near Tyson’s Reef.

While still in Bendigo, William Tyson (Jnr) began a relationship with Emma Adelaide Adams (nee Lacey) and they had nine children born between 1857 and the mid 1870s. The first three, Isabella, Thomas Lacey and Fanny were born in Bendigo. William and Emma never married, and the other children were born in NSW. The new couple returned to ‘Geramy’ Station about 1860.

William’s ex-wife, Margaret remained in Bendigo with her six children.

Margaret Tyson died in 1876 and is buried at White Hills Cemetery.

Margaret Ellen Scanlon (nee Tyson) the only daughter of William and Margaret Tyson, was one of the surviving descendants of members of the Tyson Brothers when the last of the brothers, the Hon. James Tyson MLC, died intestate in 1898.

Contradictory versions exist as to how Tyson’s Reef was named. There are no other remnants left of the contribution made by the Tyson Brothers to the early development of Bendigo.

Source: The Tyson Brothers, Sandhurst Cattle Kings, How they helped feed the miners during the early gold rush period and what remains of their legacy. © Murray Poustie 2017