James and Hannah Brierley left Manchester as assisted migrants, in 1844 and arrived in Sydney on the Elizabeth three and a half months later with the hope of finding a better life for themselves. They completed their required twelve months’ work agreements in the Hunter Valley before travelling to Adelaide by 1848 where James purchased land in Wright St and built two cottages.

Their daughter Janetta and son Hugh were born in Adelaide. By 1851 James and Hannah had sold up and moved to the Mt Alexander goldfields. Hugh died in 1853 aged 14 months and is buried at the Pennyweight Flat cemetery in Chewton. 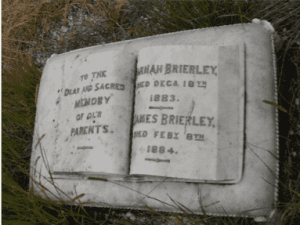 By 1854 James, Hannah and Janetta were on the Bendigo goldfields where their second son James was born.

James Brierley was a stonemason and like thousands of other skilled workers, he settled in Bendigo as the goldfield developed into a permanent and prosperous town.

During the first land sales in Sandhurst in 1854 James Brierley purchased a block of land on the corner of Hargreaves Street and Mundy Streets.

James built Specimen Cottage In 1856 in Hargreaves Street, and the adjoining two-storey cottage in 1861. He also built an hotel on the corner of the block, three shops facing Mundy Street and other early buildings. None of these buildings survive.

The following years saw the death of son James and the birth of daughter Eugenie. Tragically Eugenie also died aged four years and seven months. James and Eugenie are buried at the White Hills Cemetery. Another son Samuel was born in 1859.

In 1864 Janetta Brierley married Joseph Millin at Specimen Cottage. Joseph was a wealthy mine manager, but eight years later he died of cancer, leaving Janetta a widow with four young daughters.

James and Hannah and son Samuel lived in the cottages until they moved into a new home in Barnard Street where James had built two townhouses in the early 1870s. Janetta and her four daughters moved into the second townhouse after her husband died in 1872.

In 1877 Samuel Brierley travelled home to the UK to study medicine at Edinburgh University. By 1882 he was qualified and working at the Yarra Bend Lunatic Asylum.

James and Hannah are buried in the Bendigo Cemetery in the same plot as their son-in-law Joseph Millin. James Brierley was not a public figure but worked hard to establish a home for his family. His legacy of two stone cottages and two town houses that are still standing, occupied and in good condition makes him a significant figure in the history of Bendigo.

The descendants of James and Hannah Brierley can be found across Australia and the UK. None remain in Bendigo.