The 1856 section of the building has a front façade of local coursed sandstone rubble, with dressed quoins and dressings to openings; the side walls are rubble: the rear and internal walls are of red brick. It has a central front door with one window on either side. The roof was probably originally hipped. 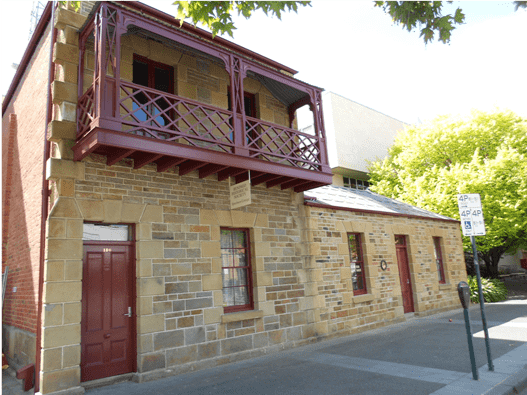 It is covered with imported Morewood and Rogers metal tiles. The roof was later changed to join up with the side wall of the cottage built next door. The chimneys were removed from both buildings by the 1970s.

The name Specimen Cottage, and the date 1856, are carved in the keystone above the door. It was probably intended to advertise and to demonstrate Brierley’s craft as a stone mason.

The 1861 section was built to match the earlier house in materials and detailing. Its side walls are of brick. Its roof is corrugated iron. On the ground floor there is a front door and one window.

Across the first floor there is an elegantly detailed cantilevered timber balcony with a hipped concave roof with two French windows opening on to it. Original floorboards and fire places remain in the two rooms on the first floor.

The houses are now connected internally to form one house.

The house at 180 Hargreaves Street Bendigo is architecturally significant as one of the last examples of a simple two-storey stone artisan’s house built in the Bendigo area, and for its unusual conjunction of two distinct building forms.

It is significant for the sensitive detailing around the openings and for the unusual use of sandstone for the walls and as a demonstration of the material success of its owner-builder.

In 1887 Brierley’s corner block of land was purchased by brewer James Steward.

From 1955 – 1959 the property was owned by Norman Guest and the two-storey former hotel building on the corner was used as Guest’s Motors.

From 1960 – 1971 Pulfer Motors operated from this site and occupied the three shops facing Mundy St. Office workers from Specimen Cottage used the toilets at the back of the Pulfer building. There were electric radiators in the four rooms of the cottage. Workers from Pulfer Motors used the two-storey cottage for tea rooms. During this time the cottages were classified by the National Trust on 15.7.1965

In the early 1980s the land was purchased by the Victorian Education Department and amalgamated with other Bendigo TAFE properties. At this time the cottages were almost derelict. All other existing buildings were demolished in 1983 to make way for the current TAFE Ted Thompson building.

The cottages were fully restored in 1984 by the Public Works Department for Bendigo TAFE. The cottages became the home of the Bendigo Historical Society Inc. in May 2013.